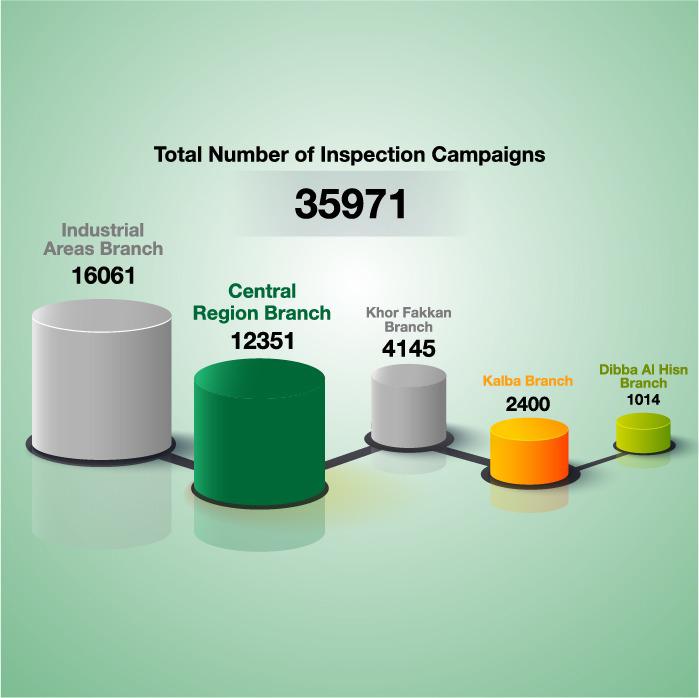 The branches of Sharjah Economic Development Department (SEDD) in Eastern and Central Region as well as the Industrial Areas region carried out 35,971 inspection campaigns since the beginning of Coronavirus pandemic until September 2020. These campaigns were held by SEDD Commercial Officers periodically to ensure the safety of all economic establishments and practices in all areas of Sharjah. Likely, SEDD intensified its role during the current period with the aim of ensuring that the establishments adhere to the instructions, circulars and policies governing the conduct of business within the precautionary and preventive measures.

In the context of geographical distribution and number of inspection campaigns held at the same time, the Industrial Areas Branch recorded the highest rate in the number of visits reaching 16,061 ones. On the other hand, the inspection campaigns reached 12,351ones in the Central Region Branch, while it reached 4,145 cones in Khor Fakkan Branch. As for the campaigns conducted in Kalba and Dibba Al Hisn Branches, they reached 2,400 and 1,014 ones.

Commenting on that, Khalfan Al Herathi, Director of the Branches Department at SEDD, stated that the high rates of commitment of economic establishments to the precautionary measures reflects their awareness of the changes that have occurred in the mechanisms of running business in the Emirate. Likewise, HE thanked the economic establishments for their high commitment and their keenness to implement all the decisions issued by the competent authorities during the last period.

In addition, Al Herathi added that SEDD aims through such campaigns to spread awareness about the importance of adhering to precautionary measures and procedures to ensure the achievement of the supreme and most prominent goal of attaining safety and security for various segments of society in light of the pandemic.

He also explained that SEDD pays great attention to stop and prevent wrong practices in the emirate's markets. Additionally, he confirmed that the Department would take all legal measures against all violators that sell counterfeit products.

Moreover, Al Herathi said that SEDD at its all branches would not hesitate to put an end to wrong actions done by ones with the aim to harm the safety and health of society or exploit the increase in demand for a number of products now. He also called the public to adhere to all decisions and procedures issued by the competent authorities, to preserve their safety. Likely, he called the people to communicate with SEDD directly through 80080000 or by visiting SEDD official website at which they can place their suggestions and complaints.