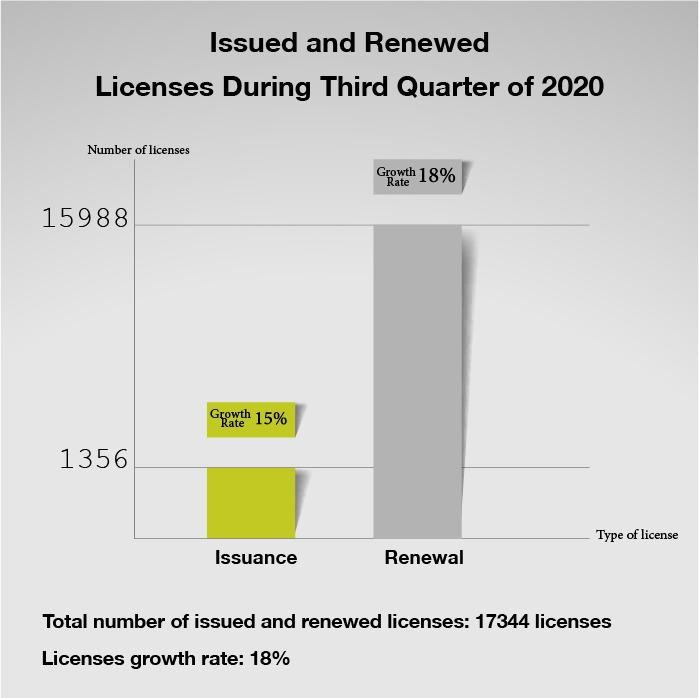 17,344 Licenses Issued and Renewed in Sharjah during 2020 Third Quarter

Sharjah Economic Development Department “SEDD” confirmed that the economic development indicators for the emirate achieved remarkable growth in the third quarter of 2020, as the total number of licenses issued and renewed in Sharjah during the third quarter of this year reached 17,344 licenses, with a growth rate of 18%.

The report issued by SEDD showed that licenses issued during the third quarter of the current year raised by 15% with a number of 1,356 ones, and the renewed licenses increased to hit 15,988 ones, with a growth rate of 18% at the same period.

The data revealed by SEDD indicated that the commercial licenses ranked first in terms of distribution according to the type of license issued, reaching 831 licenses during the third quarter of the year 2020. They were followed by professional licenses with 322. “Eitimad” licenses took the third place with 109 license, while industrial licenses came in fourth place with 47 ones. As for e-commerce licenses, SEDD issued 46 ones at the third quarter of 2020, with a growth rate of 360%.

Furthermore, SEDD branches in Sharjah city in both the main center and the industrial areas recorded the highest rate in the number of renewed licenses with a total of 12703 licenses, followed by the Central Region branch with 1903 licenses, while the one in Khor Fakkan hit a total of 635 licenses. On the other hand, SEDD branch in Kalba renewed 622 licenses, while its branch in Dibba Al Hisn renewed 125 licenses at the same period in 2020.

Commenting on that, HE Sultan Abdullah bin Hadda Al Suwaidi, SEDD Chairman, said that the data issued by the Department indicate a remarkable increase in the investment movement, which are indicators representing a sustainable growth of Sharjah’s economy. HE carried on that these numbers also reflect the confidence of the business sectors and the available investment opportunities in the emirate.

In addition, HE explained that SEDD is working to simplify services and procedures in order to facilitate procedures for business registration and issuance of licenses. He clarified that SEDD is also seeking to provide superior flexibility for investors and dealers, especially in light of the current circumstances, which will allow them to establish their business within a short period. Additionally, the Chairman stated that SEDD will do all that it takes to coordinate with various local and federal agencies in order to provide all that is needed to offer the best practices in the emirate of Sharjah.

Furthermore, His Excellency SEDD Chairman pointed out that the issuance of these data is one of the most important economic indicators that the Department relies on to study the economic situation in the emirate. Likewise, HE stressed that SEDD’s strategic goal is to achieve a comprehensive development plan that promotes economic development in Sharjah by developing services to match the highest international quality standards, in terms of speed of delivery and access to dealers in the economic sector and investors in the emirate and striving to complete transactions easily and conveniently.

From his side, Khalid Ahmed Al Suwaidi, Deputy Director of Registration and Licensing Department at SEDD, said that the growth of licenses during the third quarter of 2020 confirms the strength of the local economy and the attractiveness of the investment environment in Sharjah. Likely, the initiatives during the last period have contributed to promoting business growth and attracting more investments to it. Al Suwaidi added that such numbers and figures reflect the confidence of the business sectors in the available investment opportunities in Sharjah’s economy.

Moreover, Al Suwaidi illustrated that the results of the emirate's business, including the issuance and renewal of licenses, go in line with the general growth of Sharjah’s GDP. He carried on that SEDD would keep on working to simplify services and procedures, with the aim of facilitating business registration procedures, issuing business licenses, and providing greater flexibility for investors and dealers, in a way that allows them to establish their business within a short time.