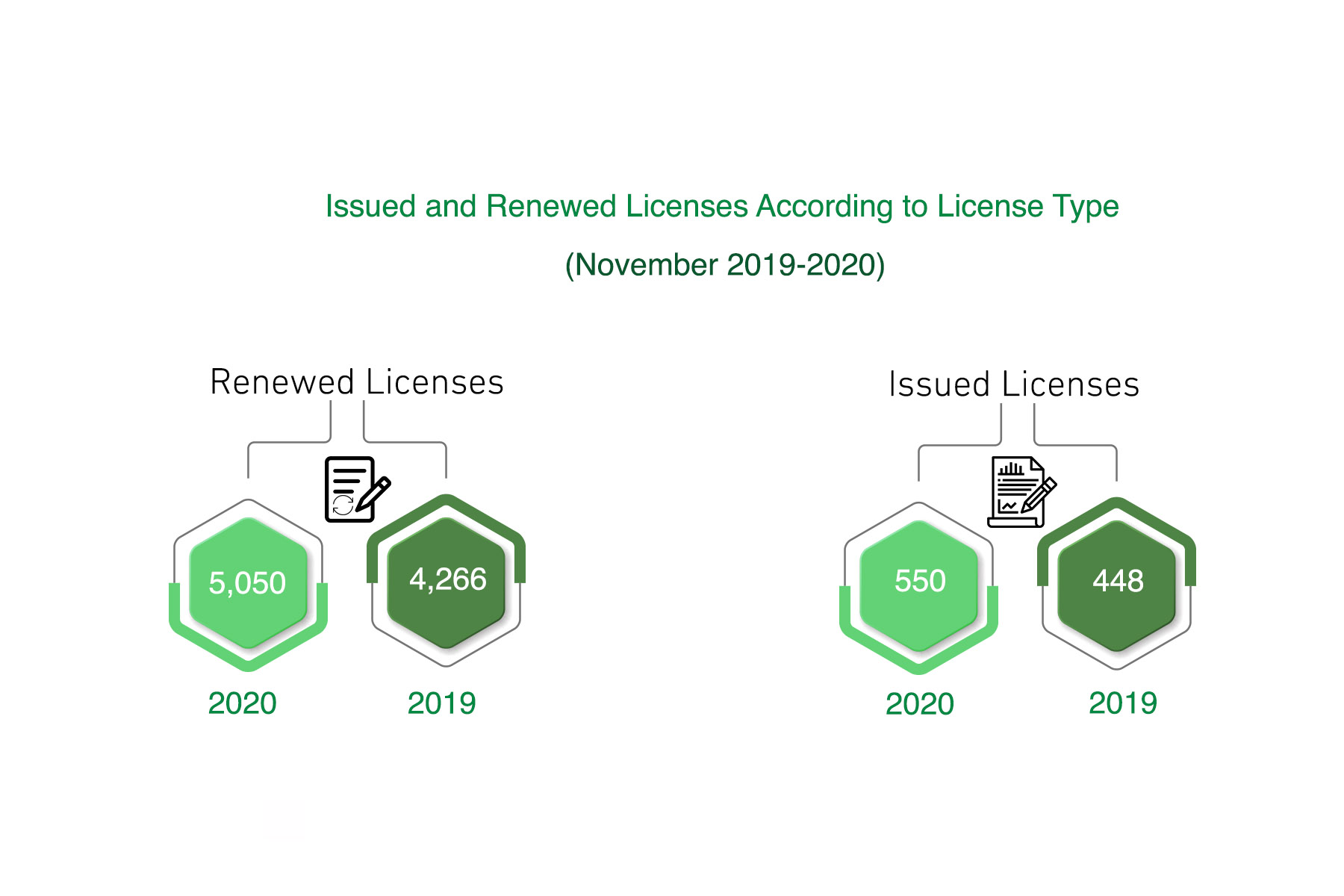 Sharjah Economic Development Department “SEDD” released the business license report for the month November 2020 as the total number of licenses issued and renewed reached 886 licenses, with a growth rate of 19% compared to November of last year 2019. Also, the data issued by SEDD revealed that the number of renewed licenses amounted to 784 licenses, with a growth of 18% compared to November 2019, while the number of licenses issued in November of this year reached 102 licenses with a growth of 23%. This confirms the strength of the emirate's economy, investor confidence and its attractiveness as a local and global economic center.

Commenting on that, HE Sultan Abdullah bin Hadda Al Suwaidi, SEDD Chairman, said that these data are among the most important economic indicators that the Department relies on to study the economic situation in the emirate. Likely, HE pointed out that the Executive Council decision which included the continuation of the exemption decision for the renewal of licenses for economic establishments, which includes the three months annual fees, as well as the deduction of (50%) from delay fines and inspection violations for economic establishments, in addition to the 50% discount upon issuance of a license for industrial establishments, were placed to enhance the contribution of the industrial sector to the GDP.

In addition, HE clarified that the Department pays great attention to implement such decision to achieve a diversified, competitive, innovative and knowledge-based economy. Such thing can be done by developing services to match the highest international quality standards in terms of speed of delivery and access to dealers and investors in the economic sector in Sharjah, and to strive to complete transactions easily and effectively.

Also, HE illustrated that the digital transformation in SEDD services reached 100% and its investments over the years in establishing an advanced digital structure contributed to maintaining the flow of business and services in these exceptional circumstances, which enabled the Department to complete all transactions digitally and through service centers.

Furthermore, HE added that these data confirm the continuous growth of the emirate's economy, which reflects the great confidence of investors and business owners in the economic climate of the Emirate of Sharjah, and its increase in its pace in all sectors that have achieved great development, among positive indicators that show continued economic growth in the current year.

From his side, Fahad Al Khamiri, Director Registration and Licensing Department at SEDD, indicated that the data issued indicate that there is a significant increase in the investment movement in the existing projects, which are indications of a sustainable growth of the economy of Sharjah. It should be noted that the data issued showed that industrial licenses surpassed others in terms of distribution according to the type of renewed license, with a growth of 29%, followed by professional licenses with a growth of 23%. After them came the commercial licenses with a growth of 15%. This growth comes after the implementation of the second package of decisions issued by the Executive Council.

Furthermore, Al Khamiri pointed out that the service centers, which are considered among the strategic partners of SEDD, work in harmony with the Department to provide a set of procedures and services that are essential for doing business in the emirate. Such thing contributes to providing a prestigious service environment for the business community in accordance with the highest standards and practices adopted by providing quality, simplified services that attract investors and stimulate the economic environment in the emirate.

Moreover, Al Khamiri called on customers from various sectors to take advantage of the department's digital services and complete their transactions through the department's electronic portal or through its smart applications. Likely, he confirmed that the decision to exempt the value of three months from the annual fees for economic establishments, which was announced among the economic incentives launched by the Executive Council in the emirate it is still in force. Also, he explained that the decision to deduct 50% when issuing a license for industrial establishments contributes to the upgrading of the industrial sector and the mechanisms for its empowerment in light of the resulting challenges. He also noted that the decision to delay fines and inspection violations for economic establishments, whereas their owners should amend their conditions within three months from decision date, contributes to enhancing the confidence of dealers and investors in the stability of the local market as well as to achieving sustainable growth and enhancing the local added value of the industrial sector from the gross domestic product.

It should be noted that the decision to postpone the payment of installments for projects financed by Sharjah Entrepreneurship Foundation (RUWAD) of three months installments helps to encourage entrepreneurs of various groups to enter the markets and stimulate the local market, which would advance the economy in Sharjah in particular and UAE in general.