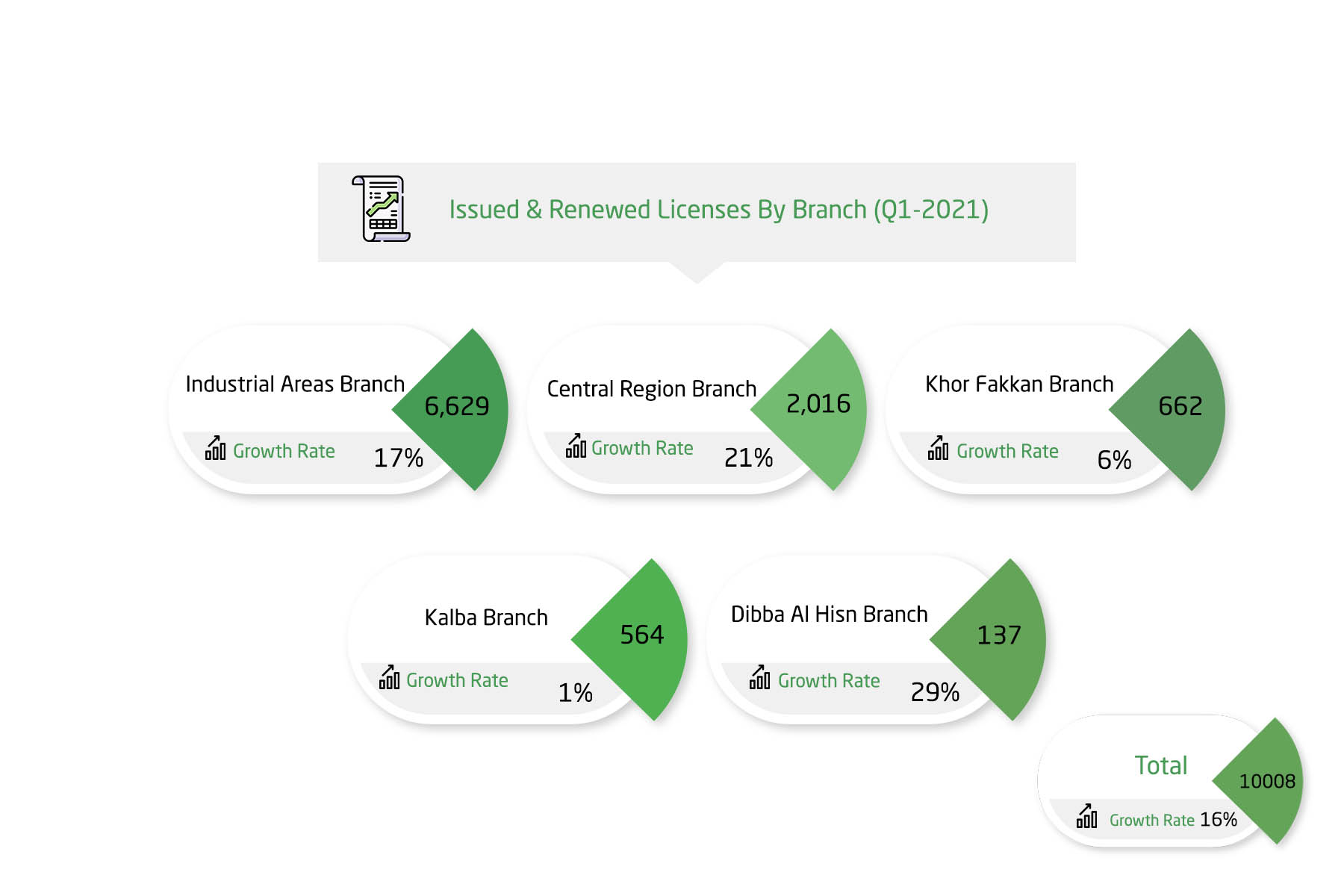 In addition, teams of Commercial Officers in SEDD Branches in the Eastern and Central Regions and Industrial Areas carried out 41554 inspection campaigns during the first quarter, with a growth of 49% over the same period in 2020. These teams work continuously to ensure the safety of all economic practices in the economic establishments in all regions of the emirate. The Department's branches have also intensified their role during the current period in order to ensure that all establishments adhere to the instructions, circulars and policies governing the conduct of business within the precautionary and preventive measures.

Commenting on that, HE Sultan Abdullah bin Hadda Al Suwaidi, SEDD Chairman, stated that the release of these data is one of the important economic indicators that the Department relies on to study the economic situation in the emirate. HE Stressed that the Department's strategic goal is to achieve a comprehensive development plan that promotes economic improvement in Sharjah, by developing services to match the highest international quality standards in terms of speed of delivery and access to dealers in the economic sector and investors in the emirate, as well as to strive to complete transactions easily and effectively.

Likely, he illustrated that the data issued indicate a remarkable increase in the investment movement in the existing projects, which are indications of the sustainable growth of the economy of the Emirate of Sharjah. He assured that Sharjah has a strategy through which it seeks to maintain a good pace of growth rates during the next stage, which depends on attractions that include the distinguished geographical location and the great development witnessed by the service sectors.

From his side, Khalfan Al Herathi, Director of SEDD Branches, said that the Department pays great attention to economic development in all cities and regions of the emirate, especially the eastern region, which is witnessing great care by HH Sheikh Dr. Sultan bin Muhammad Al Qasimi, Supreme Council Member and Ruler of Sharjah. Al Herathi pointed out that the indicators show a sustainable growth of the emirate’s economy, which depends on attracting elements that include the distinctive geographical location and supported by the continuity of the development movement. He illustrated that there have been number of tourist and urban facilities that were launched as well as tourism and commercial projects have increased, which will contribute to increasing the demand for investment in such areas.

Also, he stressed that the Department provide advanced digital services and employ the latest remote communication technologies to communicate with partners and the public of dealers, and to ensure that services are provided to them smoothly and safely. Such thing contributed to encouraging and stimulating their business and expanding their trade and economic activities in the emirate.

The Branches Department in SEDD conducted survey on the impact of development projects in the Eastern Region to study the attracting investments in the region. The results of the survey showed that 100% of investors agreed that now is the right time to invest there.

It should be noted that conducting such studies comes within SEDD’s concerns to implement its strategic plan to support and lead the economic development plan in Sharjah. Also, it seeks to achieve the highest levels of competitiveness, guided by the wise vision of HH Sheikh Dr. Sultan bin Mohammed Al Qasimi, Supreme Council Member and Ruler of Sharjah, whom calls for the importance of paying attention to developing the role of the commercial and industrial sectors.  Likely, he calls for the significance of achieving comprehensive sustainable development supported by many unique investment components of infrastructure, facilities, and services as a result of the cooperation of government agencies to provide all support to businessmen and investors to increase confidence in the investment climate in Sharjah.