We Commit To..
Taking Measures to Combat Money Laundering and Terrorism Financing Crimes

The UAE is committed to combatting illegal financial activities such as money laundering and financing of terrorism. The country’s policies and strategies detect and deter financial crimes on its soil, and prevent the use of its lands as a transit route or to transfer funds resulting from any criminal activity. The UAE also supports global efforts to counter money laundering and combat the
​​​​financing of terrorism, seeking to fully implement the standards of the Financial Action Task Force (FATF).

The UAE has taken major steps during the past years to set the legal framework and identify institutional paths for implementing the procedures and measures that would contribute to countering money laundering and combatting the financing of terrorism and illegal organisations. 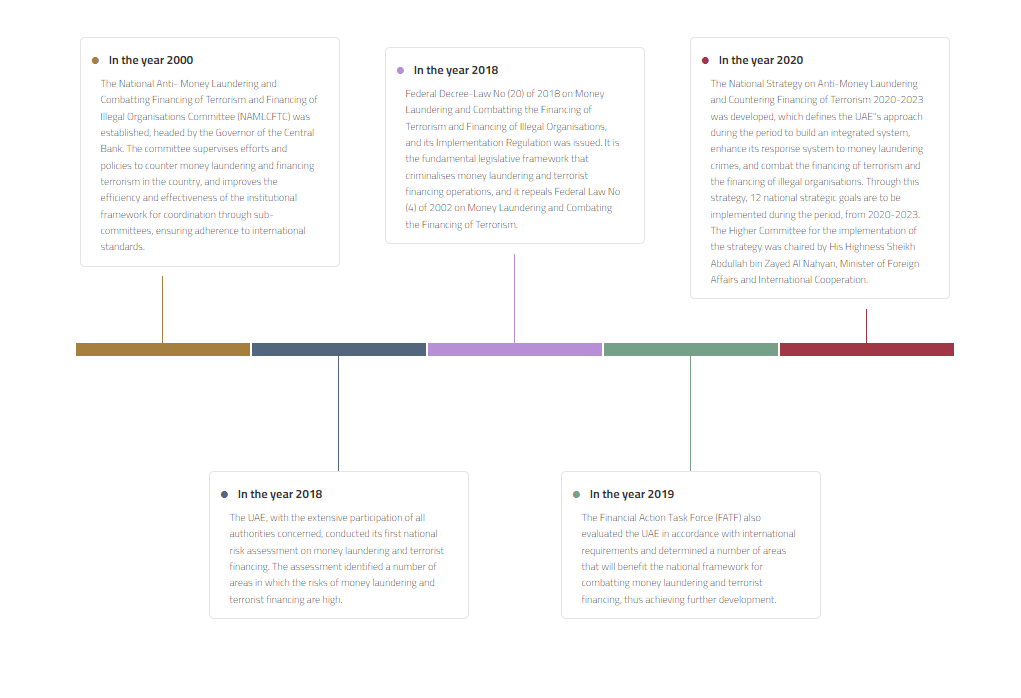 What is Money Laundering?

Money laundering is defined as any financial or banking transaction aimed at concealing or changing the source of illegally obtained funds, by passing it through the financial and banking system in order to make it appear as originating from legitimate sources, and then re-pumping and investing it illegally.

Learn about..
The Risks of Money Laundering and Terrorism Financing
​​​

Increase in crime and corruption

Organisational Chart for
Anti-Money Laundering Framework in the UAE

The Ministry of Economy, as the supervisory authority, is entrusted with the supervision of the ‘Designated Non-financial Businesses and Professions’ (DNFBPs) sector at the state level and commercial free zones in order to combat money laundering and financing of terrorism. It is committed to developing a strong regulatory framework and providing a safe environment for organisations, companies, and DNFBPs to work according to international best practices. It also contributes towards raising the competitiveness of the state’s economic, investment and financial environment, building an attractive business and investment climate within various sectors, and creating a balanced, flexible and sustainable future economic model. The priorities include providing all possible forms of knowledge, guidance and training support for Designated Non-financial Businesses and Professions, and raising their level of awareness to be able to fulfil their commitments, in partnership with various economic sectors. The main objective of the efforts of the Ministry of Economy at the international level is to raise the level of compliance with international requirements and maintain the top position and positive reputation of the national economy in global markets as well as with all countries and international partner organisations.

The Ministry of Economy announced the development of its operational plan and initiatives under the National Strategy on Anti-Money Laundering and Countering Financing of Terrorism, through the role it plays in supporting the UAE’s efforts in combatting money laundering practices, and strengthening its framework for action in fighting money laundering crimes, as well as combatting the financing of terrorism and financing illegal organisations locally and globally. The Ministry has established a specialised department within its organisational structure, called the ‘Anti-Money Laundering Department,’ to follow up and implement its operational strategy with regard to awareness, control and inspection of all activities listed under the designated non-financial businesses and professions sectors, in accordance with the provisions of Federal Decree Law No (20) of 2018 on Anti-Money Laundering and Combatting the Financing of Terrorism and Financing of Illegal Organisations, and its Implementing Regulation. This contributes to raising the competitiveness of the economic, investment and financial environment in the UAE, creating an attractive environment for business and investment, and consolidating the country’s position as an economic leader.

The DNFBPs include a wide range of non-financial sectors and activities that are mostly exposed to the risks of money laundering and misuse of commercial transactions and the funds traded in them for the purposes of money laundering or other illegal practices, given the nature of the services they provide or the products they deal with. This falls in line with international standards issued by FATF.

The Financial Action Task Force (FATF) is an intergovernmental organisation based in the French capital, Paris. Founded in 1989, it aims to combat currency counterfeiting and terrorist financing. FATF recommendations set out a comprehensive and consistent framework of measures that countries should implement in order to combat money laundering and the financing of terrorism, in addition to financing the proliferation of weapons of mass destruction. Since the legal, administrative and operational frameworks and financial systems vary from one country to another, it is not possible for all of them to take identical measures to confront these threats. Therefore, the FATF recommendations set an international standard, which countries should implement by taking measures that have been adapted to their own circumstances.